How to unlock and Relock Nexus devices Bootloader - Enphones

How to unlock and Relock Nexus devices Bootloader

Hi guys, in this tutorial i will show you how to unlock or lock (relock if it unlocked before) bootloader on any Nexus devices with computer using ADB Fastboot mode with easy commands.

So, if you have a Galaxy Nexus, Nexus 4, Nexus 5, Nexus 7, Nexus 10, Nexus S or Nexus One device and want to unlock or Relock bootloader, you need just to follow these tutorial step by step, also you can ask me in comment if you need any help or if you have a question.

Nexus bootloader is not easy to unlock but Google offers the official tools to carry it out :D


Why we need to unlock Bootloader?

Unlocking the Boot loader allows us to add more features to our android device, we can install custom ROMs that don’t require root permissions and apply a lot of modifications to our Nexus devices.


What we need before starting:

After completing, we will have to check if the installation was done correctly, that by
connecting  Nexus device to the PC with the USB cable (Make sure that USB debugging enabled), Open a command window from your computer and run the following command:

If everything is ok, you should see the serial number of our device in the list.

How to Unlock Bootloader of Nexus Devices?

1. To unlock the Bootloader of google nexus 4, 5, 7, 10..., you need first to enter the bootloader mode by following one of this methods:

Method 1: Turned off your device and Press the following button combination as per your handset:
Method 2: You can also enter to Bootloader Mode, by this command when your device turned on and connected to the computer with USB

2. Once you are inside bootloader mode you only have to execute the following command on ADB Fastboot mode command window on computer to unlock it: 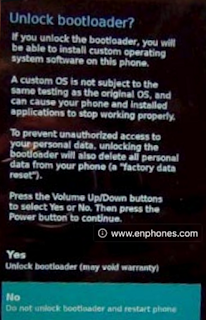 3. When you run the command, you will get a confirmation (unlock the bootloader?) ,  just Accept by taping “Confirm” on the screen of your device.


How to Lock Bootloader of Nexus Devices?

If you want to re-lock the Bootloader of your nexus device, simply you have to write the following command after connecting you device to the computer:

Other useful Adb and Fastboot commands:

We talked before about the most commonly used Commands in ADB / Fastboot for all android users:
How to use ADB & Fastboot Commands on Android
نوراليقين May 29, 2017 android Bootloader howto nexus